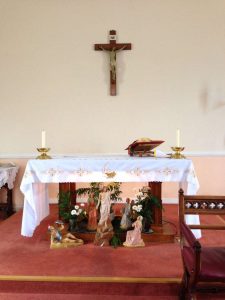 St Patrick’s Parish, Chislehurst West has been operating since 1961. It has an interesting and chequered history, telling the story of a small cinema converted into a church which has survived first as a “chapel of ease” and now as an active parish in the Southwark Diocese.

Named simply after its location, the privately owned Chislehurst Cinema was purpose built on waste ground at the corner of Red Hill and Albany Road. Inside there was seating for 270 on a single partially sloped floor and projection was by two of the “latest type” of projectors which were housed in a fireproof operating room over the entrance.

The cinema opened with a private performance on the afternoon of Thursday 23rd January 1930 with the showing of silent films “Speedy” starring Harold Lloyd and “Butterflies” with Johbyna Ralston before an invited audience. The public were admitted from the following day and admission prices ranged from 6d to 1/6 for the best seats at the back of the hall. Performances were continuous each evening from 5:45 with matinee performances on Wednesdays and Saturdays at 2:30. Films were changed twice a week on Mondays and Thursdays.

The cinema remained under the same independent ownership throughout its 30-year history until it finally closed on 3rd December 1960. The last films shown were “The Horse Soldiers” and “Lifeline”.

Fr Terence O’Beirne, the parish priest of St Mary’s, Chislehurst appreciated that St Mary’s was not easily accessible for parishioners who lived in the High Street area of Chislehurst. Therefore, from November 1953, one mass a week was held for Chislehurst West in the British Legion Hall on the corner of Belmont Lane – a short walk away from St Patrick’s Church.

It was several years before a more suitable building was eventually found when in 1960, Fr O’Beirne heard that the Chislehurst Cinema was to be sold. He seized his opportunity and made a sucessful offer of £10,750 for the freehold plus £750 for contents, including the tip-up seats but excluding the cinematograph plant. In early 1961, work began to convert it into a church, inserting windows and opening the west gallery. The former ticket office became the sacristy, the ticket office window is now the holy water stoop and the projection area became the organ loft. 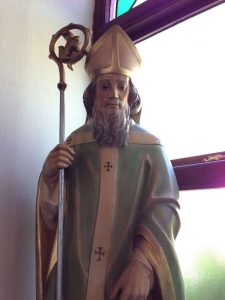 The church was opened and dedicated on St Patrick’s Day, 17 March 1961.

By 1962 attendance at the church was at such a level that Chislehurst West became an independent parish and the neighbouring semi-detached house was bought for use as a presbytery.

In 1966 a church hall was added. In 1990 the church roof gave rise for serious concern for the fourth time in the building’s short history, having previously sustained severe damage three times during the Second World War. Despite the costs involved in renovating the roof – an early estimate of £40,000 was mentioned which was a considerable sum for a small parish to raise – the fundraising response from St Patrick’s parishioners was overwhelming and within two years the money was found.

And so St Patrick’s proudly boasts over 50 years of service in Chislehurst, and today is a vibrant and welcoming parish church that continues to go from strength to strength.